Post Event Report
The APREP 2013 conference was successfully conluded on the 21st of February in Mumbai. The conference saw an attendance of about 100 senior professionals from the Real Estate Industry.

The eminent panel of speakers enthralled the audience with their thought provoking presentations and insights into the approval procedures for the real estate projects. It was a tremendous opportunity to meet one-on-one with a 100+ elite gathering of senior government regulatory experts and top-notch developers of  real estate during the networking sessions. Many concerned real estate developers expressed their concerns to the officials from the Environment Impact Assesment committee (SEAC), BMC, Airports Authority, Architects, etc.


11.30am – 11.40am: Opening Ceremony & Welcome Address
Click here to see the complete conference pictures
Participants of the Conference Included 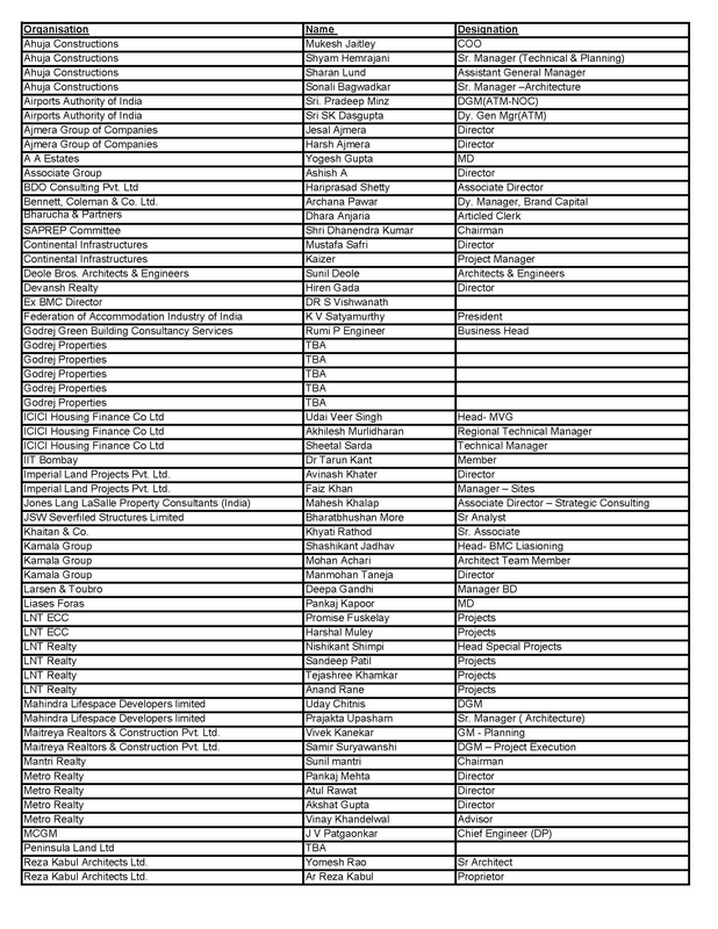 Confirmed Speakers of the Conference

Mr Chakrabarty is an IAS officer of Batch:1986 , Cadre: Maharashtra. Previously he was CEO of Slum Rehabilitation Authority. His earlier Posting was as Commissioner of Integrated Child Dev Scheme (ICDS). Some of his qualifications are Graduate(Mathematics), P.G.(Operational Research), M.Phil (Operational Research).

Mr Kumar is currently Chairman of Committee on Streamlining Approval Procedures for Real Estate Projects (SAPREP) Previous to this Mr. Kumar was Executive Director for India at the World Bank having assumed this post in November 2005. Mr. Kumar spent the vast majority of his professional career with the Indian Administrative Service (IAS), of the Government, in various jobs in industrial and economic development. Mr. Kumar joined the IAS in 1968 and served at the State Government of Haryana and Government of India. He gradually climbed the ranks to become a senior official with experience in the finance and infrastructure development sectors. From 1983 to 1986 he was stationed as the Resident Director of the India Investment Centre in London, England, responsible for promoting investments into India, joint ventures and collaboration ventures.

Mr Hadadare is currently serving as Member of the Maharashtra governement's SEAC 2 comittie. He was previously Chief Engineer of MHADA. He holds and M Tech (Civil Engg) degree. He has completed his Diploma in Housing Policy from DPU London. He was earlier a Lecturer of Civil Engg at GOA Engg College. He has vast experience is construction of Mass housing in areas of planning, budgeting, designing low cost housing & construction detailing.

Pankaj Kapoor started Liases Foras as a completely non brokerage real estate research outfit in the year 1998. Since then he has remained a focused researcher in the real estate sector. His works include “Magnet Theory” of future forecasting model of locality development and price behaviours. He has also introduced India’s First Real Estate Sensitivity Index – “Ressex”. Mr. Kapoor, today is recognised in the real estate industry for bringing in scientific approach and for developing an organised data base in the Industry. His company offers research and advisory services to Housing Finance Companies, Government Agencies, Banking, Developers and Funds.

Mr. Reza Kabul completed his graduation in 1985 from M.S. University, Baroda. After working with leading architect Hafeez Contractor as an Associate, Mr. Reza started his own practice in 1988. Various institutions in India still feel obliged for him, for working as honorary teaching faculty. He has also been a speaker for Marcus Evans “Tall Buildings” Conference in Seoul, Korea 2008. He is pioneer in tall building and at present he is working on twin towers of 100 storied at Parel for Shreepati Group of Cos., which aims to be one of tallest skyscraper in Mumbai. His firm is winner of awards such as:  All India Achievers Foundation for “Bharat Gaurav Award” 2010 , 2011 – The Indian Institute of Architects Kolhapur for “Emerging Master in Tall Buildings” & in 2012 – DNA Realty GEN NEXT “Award of Excellence”.

Mr. S. Sridhar , a professional banker of 38 years,retired recently as Chairman and CEO  of Central Bank of India. He was earlier the Chairman and CEO of National Housing Bank, the country’s mortgage regulator. Mr Sridhar also had a five year stint as the Executive Director and COO of Export-Import Bank of India. He is now formally associated as "Advisor" to RICS South Asia. In his role, Mr. Sridhar will be advising RICS on the strategic direction of South Asia operations as well as advising the Government, policy makers and key stakeholders on matters where RICS expertise can be instrumental in enhancing professionalism and institutionalizing best practices within the Indian real estate and construction sector. Mr Sridhar has been associated with formulation of public policy, in the areas of export finance, foreign direct investments, housing and rural finance.

Profile to be updated soon.
* Denotes Tentatively Confirmed / Subject to Legislative Duties
About the Organisers
Blackarrow Conferences is a leading conference organizer which specializes in professional high level business conferences targeted at senior management in a number of industry sectors. The only independent conference company to continuously organize real time & relevant topic related conferences for the Real Estate Sector. We at Blackarrow Conferences strive to provide you with the correct business information on critical topics - when it happens & how it matters, from the experts who specialize in the Real Estate Industry .

Click here to see our past Real Estate Events

For any information or assistance, contact
Sarfraz Patel: +91-9833487628 / sarfraz.patel@blackarrow-conferences.com